Current season tops are always a pleasure to cover; after all, they are fresh in the minds of punters all around, readily available, and easy to break new ground with (becoming the first site to publish a new review). Today we’ll be indulging ourselves by doing just that with a brand new home top for Tai Po FC! 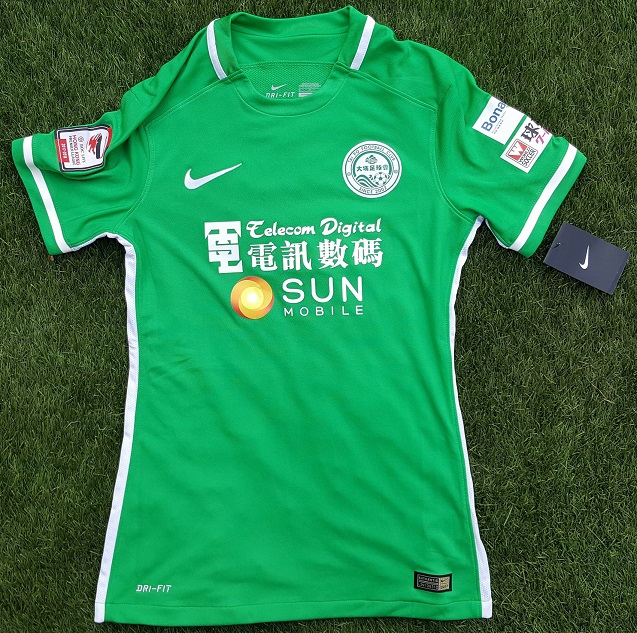 This is the second Tai Po top we are covering, after last week’s lime offering (we recommend reading that piece first if you haven’t already) and the second 17/18 season article on the site, following the fantastic Dekani shirt we nabbed on expedition in Slovenia.

As covered previously, Tai Po FC are a side hailing from Hong Kong’s New Territories where the 3200 capacity Tai Po Sports Ground sets the scene for the club’s Hong Kong Premier League matches (after years of exile due to the facilities not meeting competition regulations).

Although superfluous given our previous article, a direct comparison between the 2014/2015 and 2017/2018 shirts just goes to show how much of a difference a non-standard shade of green can make; the adidas-made shirt of yesteryear pops out, especially when contrasted with Nike’s effort, making it easy to forget that both of these are home shirts of the same club. It’s jarring, and would no doubt lead to pitchforks being readied if a big European team like, say, Manchester City would switch from sky blue to midnight blue or navy for a season.

Although not per se quite as dramatic as in our example, this tactic is often used by kit suppliers to boost sales; serving up a daring break from tradition as a home shirt in season X would make older home tops obsolete (forcing consumers into buying the new shirt to remain fully up to date), and result in boosted sales for a traditional effort the next season, as fans would be relieved and happy to return to familiar colours. Prominent examples of this somewhat shady practice include Southampton and West Bromwich Albion under adidas (going to fully red shirts and white plus navy pinstripes respectively, with both clubs going back to stripes the next season), with some teams and brands abusing nostalgia by selling ‘anniversary’ kits based on antiquated colours for a season (Arsenal and Nike selling maroon tops in 2005/2006, Bury and Surridge plomping for light blue and chocolate, and Erreà and Crystal Palace serving up a fan-favourite sash).

No such trickery in Tai Po though, where Nike’s swoosh replaced adidas’ three stripes as the Green Warriors climbed out of the second tier two years ago, having been relegated from the Premier League in 2014/2015.

Although the Lee Kee Group still supports the club (we’ll return to this notion later), we are faced with a fresh sponsor on the chest; Telecom Digital/Sun Mobile. To our initial confusion, this is one sponsor rather than two, as they turned out to be a chain of mobile phone shops in Hong Kong. Usually we have an axe to grind with sponsors who force their multicoloured logos onto shirts of a different hue, but given the very clean look of the Nike Revolution III template, club and sponsor get a thumbs up from us (even if it’s a bit much to use four different fonts).

The only detailing inherent to the shirt template are the white stripes running down the sides and the single line wrapping around the stretchy collar, which is seen here. The inside affords us, besides the knowledge of this being a Dri-FIT product, a look at the two different kinds of fabrics used in creating the shirt; while the front and shoulder panels are made of straightforward polyester, the mesh used for the back panel is extra breathable, lending a different look to that side of the shirt. 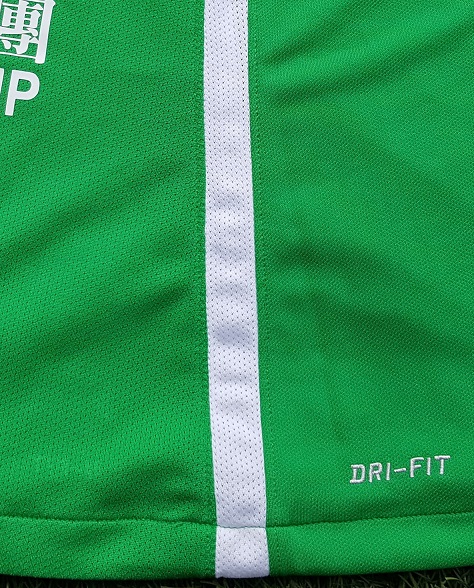 This shot of the bottom right side aptly shows the difference this makes; the back (left) and the white stripe connecting front and back are made of this mesh and hence look a lot coarser than the front of the shirt. The science behind this decision is lost on us (does the human backside sweat so much more than the front that it requires special treatment?), but it certainly is comfortable to wear.

That being said, eagle-eyed readers may have spotted the weird white residue on the lower part of the back panel; we’re not quite sure how this came about, but considering it reads Dri-FIT in reverse, we’ll chalk it up to the embroidered wordmark on the front panel imprinting the back during storage and transportation.

As always, one can find a Nike jock tag on the lower left side of the front, which is in gold this year, 2017 denoting the catalogue from which this top was taken and the serial number denoting the template and colour combination. Blissfully absent is the cringy tagline of ‘Engineered to the exact specifications of championship athletes’ (what is a championship athlete anyway? Do we qualify as one if we partake in the local area’s Sjoelen/shufflepuck tournament?).

We previously noted that the only detailing inherent to the shirt is the white on the collar and sidepanels, which remains true despite the inclusion of white tape on the shoulder/sleeve cuffs. This is not an erroneous statement, as this tape is not applied to all Revolution III tops, but added later to the taste of individual clubs. Here, we are grateful for its inclusion, if only for the addition of more white. The practical effect of this tape is to make the cuffs less prone to ripping and tearing while under duress (in other words, in case you’ve got an opponent tugging on your top).

On the left sleeve, World Soccer returns once more as a staple of Hong Kong kits whereas Bonaqua has their fittingly green/blue logo featured for a second straight season; as one could expect of a brand carrying the term aqua in its name, they are purveyors of (mineralized) bottled water.

The right sleeve has the league’s mandated patch, listing its official sponsored title of the BOC Life Hong Kong Premier League (BOC Life being one of HK’s top insurance companies). The stylized dragon in red and black makes for a fine mascot, but we can’t help but ponder whether these patches would look better when rendered in club colours (in this case, white with green and black as a tertiary colour would look great). However, as these patches are made in bulk for use by all the Premier League clubs, economies of scale would render individual patches too expensive to be worth it.

What we absolutely love here, though, and what wouldn’t look out of place anywhere in the world, is the listing of the season during which this patch and shirt are used! All across the globe, professional leagues require teams to carry their branding on one or both sleeves, but Hong Kong is the only instance we’ve seen where this small but important detail is included. A great idea that would add individuality to shirts (never a bad thing), and be helpful to casual observers trying to identify which shirts are which. Full marks to the HKFA and league organisation for this!

As hinted, the Lee Kee Group returns once more, albeit on the lower back of the shirt this time which ensures this textured side is not wholly plain. The seam visible across the shoulder further reveals up to where the breathable mesh is placed, with the fabric above it sharing its make with the front and the sleeves (which are capped on their undersides by the white side panels, terminating where they meet the cuff tape). 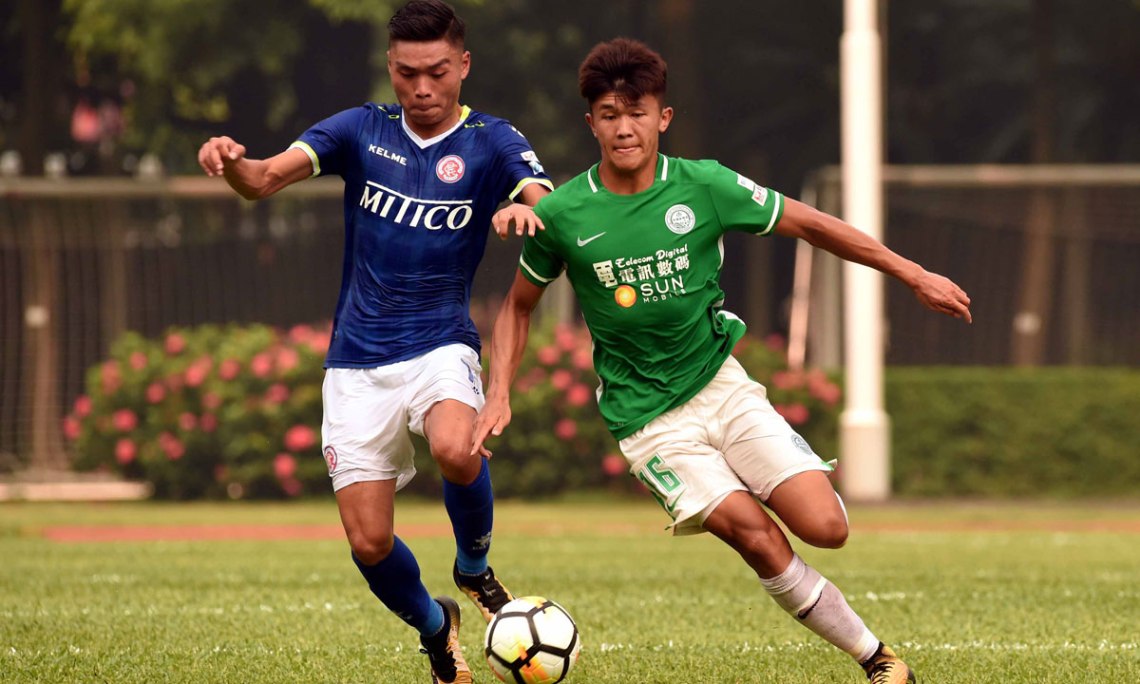 Here, we see HK international Tan Chun Lok don the green while contesting the ball with Biu Chun Rangers’ Tommy Chuck during the two clubs’ Premier League meeting at Sham Shui Po Sports Ground (which Tai Po won 0 to 3). The shirts are paired with white shorts and socks this season, which make for an attractive combination; away from home, the team dons a fully red outfit, using the exact same template. 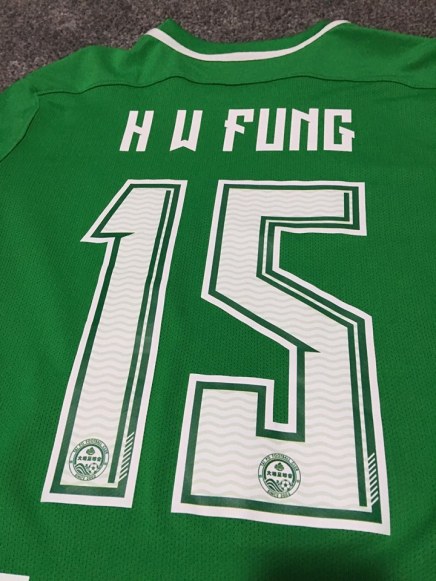 Although our copy of the shirt came without printing of name and number, we didn’t want to deliver sloppy work and not cover these, especially seeing as the number fonts are absolutely superb; crests present in sharply lined numbers that mirror the waves found in the district’s symbol.

All in all, Tai Po players and supporters can be proud of what is a very fine shirt this season, which, despite being a standard catalogue template, is elevated through excellent sponsors and just the right amount of contrast (white) to remain both smart and unique.

As mentioned in the previous article, if you’ve developed an interest in learning more about Hong Kong football, we recommend Offside, which provides excellent coverage of the league system and national team, and the Hong Kong Football Association’s official site, which has a great section on the various clubs, where you can also take a look at their home and away kits for this season. Of course, one is also invited to visit Tai Po’s official site for further information on the club and this year’s squad.

As with the 2014/2015 home top, all of us here at Club 25 are immensely grateful to friend of the site Adrian for his kind help in allowing us to bring this shirt into the limelight, and would like to, on his behalf, welcome any and all fans and travelers to a home game at the Tai Po Sports Ground some time. While easy to lose sight of among the violent promotion of big European leagues in sports bars and on television channels the world over, it is the grassroots clubs from small football countries like Tai Po and Hong Kong that make the sport as enchanting as it has proven to be!

View all posts by club25football

Welcome to Club 25, the original football shirt blog that seeks to give you expert reviews and coverage of both classic and brand new tops collected from the most far-flung places on Earth.

Our mantra is to focus on quality over quantity; as such, expect our contributors to bring in-depth looks at players, shirts, clubs, manufacturers, sponsors, designs, and all other elements that make up the modern footballshirt as we know it.

If you wish to donate a shirt to the club, please get in touch with us via the Contact section of the site for reimbursement options and address details. If you feel you have a valueable thought or post to contribute, feel free to shoot us a message via that same page.

Please bear with us as we grow and cultivate Club 25 from its humble inception into a hotbed for new and exclusive content for the beautiful hobby that is collecting footballshirts.